The Beginning of the End for Those Tiny Shampoo Bottles

Hotels switch to wall-mounted dispensers to save money and plastic, but risk the wrath of travelers used to their routines

Those little bottles of shampoo, conditioner and body wash in hotels—icons of travel—are disappearing, replaced by bulk dispensers mounted on shower walls. And some travelers are in a lather.

Marriott is switching to larger bottles in wall-mounted racks in 450 hotels at five brands and plans to expand to 1,500 hotels in North America by January. InterContinental Hotels Group is rolling out wall-mounted bulk dispensers at four brands this year. IHG’s upscale Kimpton brand already uses big bottles in showers.

Even a detail as tiny as a 1-ounce bottle can fire up travelers, meaning hotels must put real thought into tweaks like this. Just last week, the musician Halsey sparked a debate when complaining on Twitter that hotels don’t address the needs of minority guests with the shampoos they provide.

Hotels say bulk dispensers cost less and are better for the environment—billions of half-full bottles get thrown away every year. Think of it as roughly 1,000 bottles for every hotel room, multiplied by more than 5 million hotel rooms in the U.S. 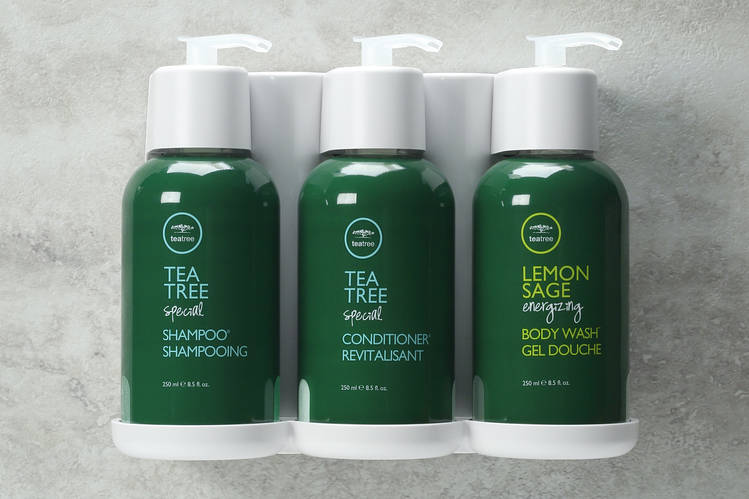 Marriott says that by eliminating little bottles of shampoo and conditioner it can upgrade quality to this Paul Mitchell Tea Tree line and save money. But some travelers say they prefer individual bottles to bulk.

Some customers, especially families packing into rooms, want more than the squirts you can get out of little bottles. Several chains have studied bottle behavior carefully and discovered many travelers find the wall-mounted pumps easier to use. You don’t have to get out of the shower wet if you forget to bring bottles over from the sink. The bulk dispensers end the struggle to read small print without glasses or fish a bottle cap out of the drain.

But some road warriors say wall-mounted racks look low-class. They’re steamed that removing their prized individual bottles looks like just another in a long string of amenity cuts from hotels, like mouthwash, stationery, sewing kits and pens.

“What’s next, getting rid of the packs of coffee and making us scoop out of a can?” says Dennis Lennox, a strategic communications consultant from Detroit who spends more than 200 nights a year in hotels. “I think it’s cheap, incredibly cheap.”

Sometimes bulk dispensers are empty, he says. But Mr. Lennox’s bigger complaint is that, like many travelers, he collects toiletries and other giveaway hotel products and delivers them to a homeless shelter.

Marriott says its change allows it to offer higher-quality bath products at lower cost and reduce waste. Starwood Hotels had bulk dispensers on shower walls at some brands, and Marriott has learned from that after it merged with Starwood. 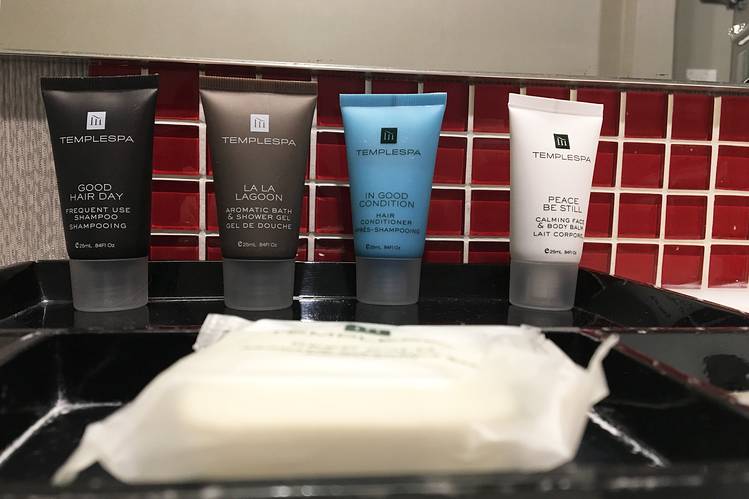 Small bottles of bathroom products, like these at a Crowne Plaza Hotel, are a staple of travel. But many hotels, tired of buying and throwing away millions of bottles, are replacing them with wall-mounted bulk containers.

And the landfill waste can be significant, says Liam Brown, who is responsible for Marriott brands like Courtyard, Residence Inn, Fairfield Inn and Springhill Suites in the Americas. Little bottles are never refilled and rarely recycled. The initial 450 properties where Marriott will make the change use 10.3 million little bottles a year, or 113,000 pounds of plastic, he says. When the change reaches 1,500 hotels it means 34.5 million bottles, or 375,000 pounds of plastic a year.

Savings will be small, Mr. Brown says, at about $2,000 a hotel a year. But Marriott says it did extensive testing and believes the wall-mounted bottles will work better. Mr. Brown says high-end spas, including Marriott’s own Ritz-Carlton spa showers, use bulk dispensers.

“This is certainly not an arbitrary decision,” he says. “I don’t think that anybody would perceive it as a budget or a downgrade. Certainly in the testing we did, it did not come across that way.”

Hotels say dispensers are locked and tamper-resistant to prevent sabotage. Most are designed with some clear plastic so housekeeping staffers can see how much remains. Many hotels outside the U.S. use wall-mounted dispensers, some only offering one all-purpose soap/shampoo.

New York City-based finance professional Sydney Chun thinks Marriott’s new Tea Tree pump bottles will remind people of using soap dispensers in a public restroom. But there are benefits, she says. She has long hair and needs a minimum of two hotel-sized bottles to cover her hair, so having big bottles helps.

“It does get old to call the front desk and ask” for more, she says.

Some chains are bucking this trend. Choice Hotels, a group of 6,800 franchised hotels mostly under budget brands, says it has decided to stick with small bottles. Customer feedback is mixed, Choice says. Hotel guests often don’t believe the communal bottles are clean, full and well-maintained.

“Guests really want to get to their hotel room, including their bathroom, and not see any evidence of anybody else having been there,” says Anne Smith, Choice’s vice president of brand management and design.

“If done right, it can be one of the top drivers of delight and guest satisfaction,” she says.

Wyndham and most other large hotel companies send leftover soap that’s been sanitized and repackaged to a charity called Clean the World for recycling.

Squeezing Out The Bottles

These Marriott and InterContinental Hotel Group chains are moving to wall-mounted bulk dispensers for shampoo, conditioner and body wash.

Posted by the Wall Street Journal on May 1, 2018 and written by Scott McCartney. Original article can be found here.