Where Does Dirt Hide in Your Facility? 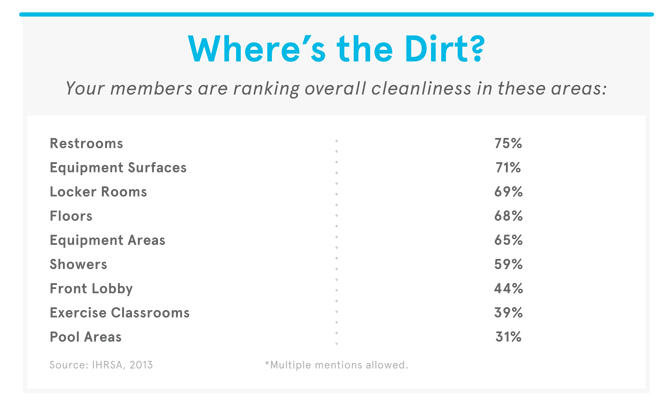 Where's the dirt? Your members are ranking overall cleanliness in these areas as upon picture.

The good news: 2 out of 3 health club members report they have never been to a club they perceived as unclean and 84% view their current club as clean.

When you look into how much money your club might lose if you don’t keep a clean club, IHRSA estimated the following:

The Impact of Cleanliness:

1 out of 5 members has considered leaving their current club. Despite this alarming statistic, you have the power to “tip the scale” in your club’s favor. You can rise to meet this concern by focusing on features that add value to membership, such as hiring qualified staff, keeping a clean environment, and providing a wide selection of equipment and group exercise classes.

While clean clubs win with members, the inverse is also true: The perception of an unclean club can lead to lost revenue. For 10% of members who have recently quit a gym, the unclean environment of the club contributed to their decision to terminate their membership.