Athletes and other fitness-minded individuals typically focus on attaining the perfect combination of strength and speed. An abundance of strength does not necessarily have to compromise speed and vice-versa. In fact, an increase in strength has the potential to enhance speed. It is advisable to commit to a balanced strength program that works the upper and lower body with pulling and pushing movements. This program should also address the core muscles to boot.

The Role of Plyometrics in Speed and Strength

Plyometrics is the missing ingredient that translates strength into speed. This form of exercise involves rapid and powerful movements that quickly expand and shorten muscles. The main goal is to boost one's ability to apply and transfer force. Let's take a look at some examples of plyometric movements that maximize the body's strength and speed.

Lateral Bound – A Counter-movement for Stabilization

This movement begins with the looping of a mini band above the knees. Stand on your right leg, bend at the knees and hips. Flex your glutes and legs to jump to the side. Allow your arms to generate force while extending the knee, hip and ankle of the leg you use to push off with. Land on the opposite leg. Hold this position for five seconds. Return to the standing position and repeat on the other side. Be sure to jump as high and far as possible. Try to stick the landing every time and your balance will gradually improve. 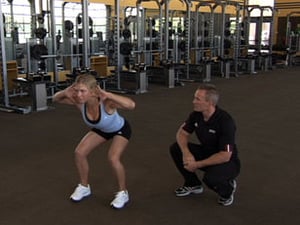 Begin with your feet positioned slightly outside of your shoulders. Place your hands behind your head. Sit down in a squat position. Keep your knees behind your toes. Jump straight up. Pull your toes to your shins when in the air. Rotate 90 degrees to the right. Try to land in the squat position. Return to the initial position and repeat the rotational jump in the opposite direction. Try to keep your chest up and hips extended throughout the jump.

Begin by standing on your right leg. Load your arms and hips and bound as close to a 45 degree angle as you can. Land on the other foot. Rapidly bound back at a 45 degree angle to the opposite leg. Hold this position for five seconds. When bounding, aim for height as well as distance. Try to use your hip and arms to create force throughout the duration of the movement.

Start out in the long split stance in an upward position with your arms at a 90 degree angle in front of your torso. Drop down into the split squat position. Swing your elbows back. Start the jump with both hips and arms. Exchange your legs when in the air. Pull your toes toward your shins in mid-air so they are properly positioned for the landing. Start the next jump immediately after landing. Try to keep your front knee behind your toes and keep your back knee off the floor.

There are numerous other ways to boost speed and agility. If you are a coach or instructor of any variety, do your best to educate your athletes. The typical athlete does not have a comprehensive understanding of why he is performing a particular drill. Uninformed athletes might even construe some such drills as a form of punishment. Be sure to explain the specific purpose of each drill so the athlete knows how it impacts his athletic performance. Such an understanding will inspire the athlete to work harder as he will have a grasp on how his hard work will eventually pay off.

Resist the temptation to turn your workout into a session for conditioning. The ultimate aim is to boost speed and agility. Make the work periods short and the periods of rest fairly long. This allows for a complete focus on each drill. The goal is to teach the nervous system how to function in an efficient manner. Fatigue will only worsen mechanics and lead to a reinforcement of the same old flawed patterns of movement. Keep exercise periods between 2-10 seconds. Rest periods can last upwards of a full minute or longer if the activity is particularly strenuous.

Key in on Mechanics

Repeating flawed movement patterns over and over again is a recipe for disaster. The manner in which one moves when performing drills and practicing is incredibly important. Focus on perfecting your technique. Master your technique and you'll be able to pass it on to your pupils if you are a coach or instructor. The basic movement concepts that should be mastered include pivoting, cutting, running, jumping and shuffling. Make such movement training a core component of your training program and participants will eventually enjoy improved speed and agility.

Topics from this blog: Training Tips